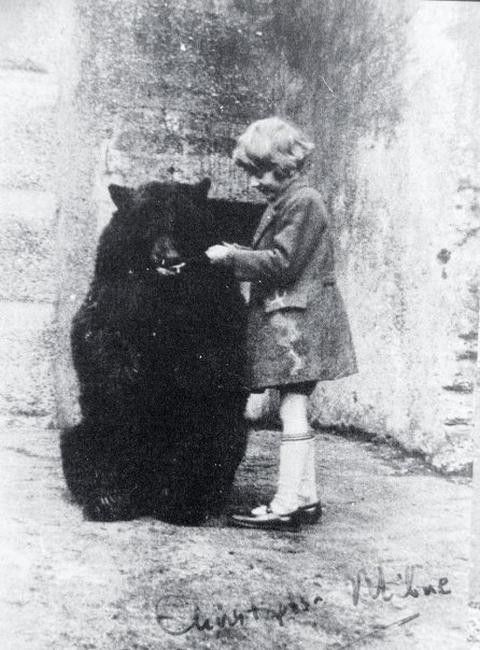 While walking along a lake in Ontario during the period of the First World War in 1914, Harry D. Colebourn, a Canadian veterinarian, encountered a hunter who was placing a little female black bear he caught into a cage. Out of sympathy to the sow, Colebourn paid the required 20-dollar ransom to rescue her and named her “Winnie”, a name derived from his hometown, Winnipeg.

While Winnie relieved Colebourn’s homesickness to some extent, Colebourn also served as Winnie’s adoptive father. They got along very well, so much so that Winnie was made the auspicious mascot in the army.

After a couple of years, Colebourn were suddenly enlisted to the army and were summoned to serve France, which meant that he couldn’t look after Winnie any more. So he decided to leave her under the care of the London Zoo.Thanks to this turn of events, Winnie met with a little boy called Christopher Robin Milne.

Robin adored Winnie very much. He often went to the zoo to see her, and even named his teddy bear “Winnie.” Inspired by this, Robin's father,Alan, wrote a children’s book in 1926, which we all come to know as “Winnie the Pooh”.