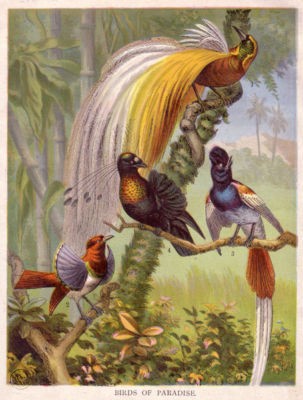 The “bird of paradise”, also known as the “birds of God”,is a general term of the family Paradisaeidae. According to the latest classification system, the family only has 41 species spread across the world.Most of the male birds have colourful feathers and gorgeous plumes.

Juan Elcano was a voyager who followed Ferdinand Magellan, a Spanish explorer, on his voyage around the world. In 1522, he acquired specimens of several birds-of-paradise from the trading port of South Asia and brought them back to Europe. The birds were so gorgeous and elegant that even those well-informed travellers were amazed.

To the lack of knowledge of European naturalist, the native people prepared these bird-of-paradise specimens by removing their feet. They were impressed by the beauty of the birds and initially believed that these birds were born without feet. Portuguese called them as “the birds of sun”, while other Europeans called them “the birds of paradise”. Because the specimens had its feet removed, the Europeans were led to the belief that the birds were adapted to fly ceaselessly and never land, just like birds that would hover in the paradise forever.

It was not until 1824, when a scholar collected a specimen of a bird of paradise in the tropical jungles of New Guinea, that the misunderstanding was finally cleared. But the term "bird of paradise" is still in use today.