Egyptians and their Cat Folder 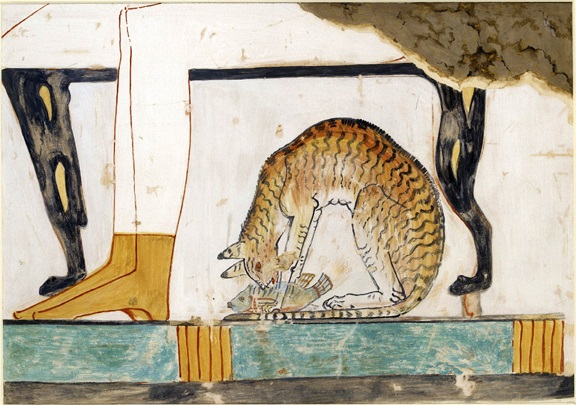 Egyptians and their Cats

According to experts'research, cats can be traced back to Predynastic Egypt of nearly 5,000 years ago in ancient Egyptian archaeological records. Mummies and statues of cats,whose number surpasses that of dogs, are often found by archaeologists in the ancient tombs, which explains how fond the Egyptians were of cats.

Why do they love cats so much? Among all the gods of ancient Egypt, only Goddess Bastet has the image of a cat. She represents the moon and women, and she’s highly respected by people. Perhaps it is Bastet who makes cats so special in Egypt.

There is also another saying: there are more realistic reasons why cats are closely related to the life of the ancient Egyptians. Crops attract mice, and cats hunt mice; cats can also drive pests and snakes out of the streets in the city. Humans began to understand the benefits of the cats and learned to protect and cherish them.

The rich will adorn their cats with gold ornaments, and let the cat eat the same food as themselves. If the cat passes away, the whole family will even shave their eyebrows off to show sadness. They smear the body of the cat with sesame oil,and then wrap it into a cat mummy with a white cloth to let the cat stay by their sides forever. Some people think that the cats found in the mummies were killed to be buried along with the dead. This is unlikely to happen, because those who kill cats in ancient Egypt will be sentenced to death, even if they killed the cats by mistake.

Egyptians and their Cats Folder